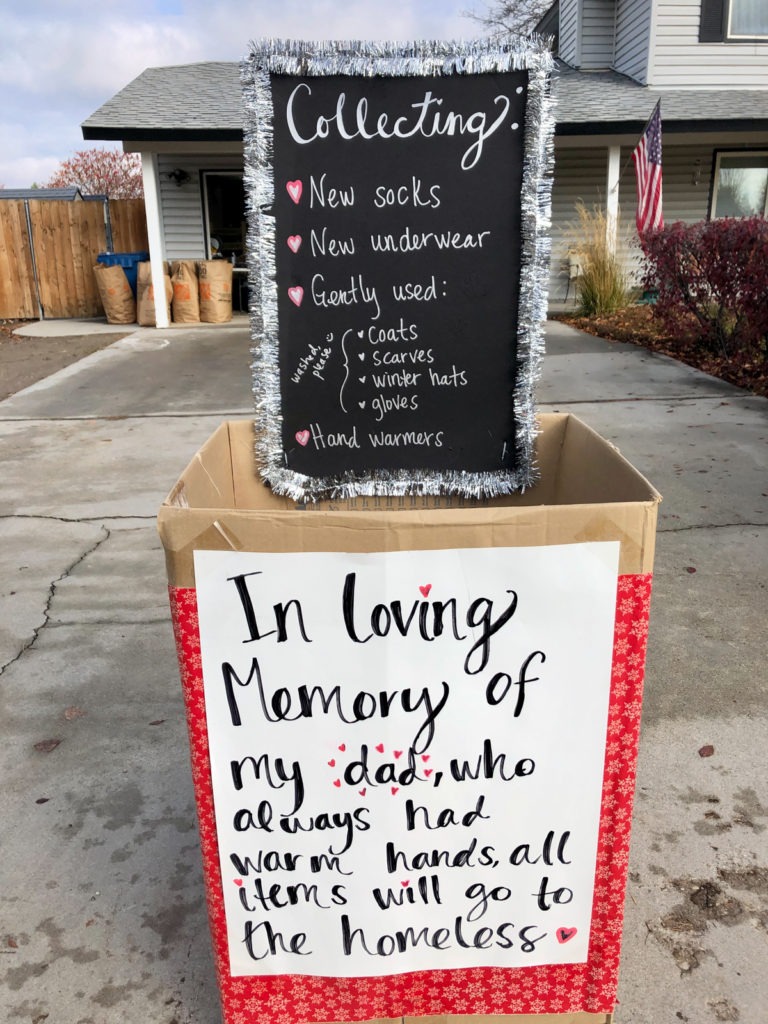 Caption for 2020 Clothing Drive: Wendy Jepson of Boise was motivated to perform acts of service to help address the sadness she felt following the death of her father, John Stutznegger. Shown here is a handwritten sign she erected in front of her home in 2020 to help collect clothing for the homeless. (Courtesy photo)

The Buddhist monk Thich Nhat Hanh once wrote that suffering “…is a kind of mud to help the lotus flower of happiness grow…there can be no lotus without the mud.” Though not a Buddhist, Wendy Jepson understands this concept very well.
“When I lost my father 17 years ago,” she said, “I was devastated.”
Initially overwhelmed by her grief, the Boise woman ultimately elected to turn the sadness at her father’s passing into a positive: to find a way to serve others.
“Through my church, I had had many opportunities to serve others,” she said. “I knew that helping others would be a way to overcome the heartache I felt.”
That help would manifest itself in several ways, each seeking to provide comfort to those, human and animal alike, in need. So every November for the past six years, to commemorate the date of her father’s passing, she has launched philanthropic projects, each supported solely by her funds, in-kind or cash donations from her neighbors and by the community.
“I was hesitant to reach out at first, but eventually used social media to seek the help of family and friends,” she said. “The response was overwhelming.”
Her initial outreach six years ago was to create what she calls Cancer Care Bags for cancer patients at St. Alphonsus hospital in Boise. Each contained items such as a blanket, skin care lotions, lip balm, candies and a personal note from Jepson. Ironically it was in delivering one of these bags to a woman in the final stages of cancer that Jepson received a gift herself.
“One of the patients was a lady in the final stages of her life,” she recounted. “She was a wonderful person. She spoke with me about my father, my project and my desire to honor his memory. In the end it was beautiful [for me] to be in her care.”
The following November she and her family prepared small backpacks for kids their school counselor knew could use them.
“We left the distribution up to the school counselors because we knew they would distribute them to children with the greatest need.”
By 2018, Jepson focused her project to helping children who were hospitalized at St. Luke’s during the holiday season.
“We made up ‘Santa’s PJ Packs’,” she said. “Each contained pajamas, a blanket, picture books and a letter from Santa.”
The Boise Humane Society benefited from her next project with special “Fur Baby Bags” donated to the animal shelter intended for both dogs and cats. “We even included a note in those bags,” she recalled.
The COVID-19 pandemic in 2020 brought new challenges and a new focus to Jepson’s philanthropy.
“It was such a hard year for everyone,” she said. “So many people had so much need and we wanted to find a way to help.”
Her initial response was to create her own food pantry in her front yard. From March until July, she placed tables in front of her house with free food for anyone who needed it.
“It was an eye-opening experience for me about the amount of need there was in our community,” she recalled. “We used social media as one way to advertise our food pantry. The messages from people were heartbreaking. People needed food. People needed help. People were hungry.”
It was from those messages of need that Jepson decided she would launch what has become her primary focus.
“I almost didn’t move forward,” she explained. “I had asked so much of the community to help with my other projects, I didn’t want to over-ask.”
Ultimately she moved ahead with a project to provide warm coats for those in need.
“My own father struggled with homelessness in his own life. I think because of that he always tried to help people. I wanted to honor him, and at the same time, do something meaningful.”
The result was a huge box the size of a dishwasher in her front yard with a neatly lettered sign asking for donations of coats or other warm clothing for the homeless. The sign points out why she is asking for donations and that it is a memorial project for her late father.
“The box goes out November 1 and I turn the donations over to the Interfaith Sanctuary in December. The first year I put out the box it filled very slowly during the month, then I put a sign on the box that said it was the last day to donate. By that evening, the box was overflowing.”
Any cash donations are carefully accounted for and used to purchase other items needed by the homeless, including socks and underwear, items most people take for granted.
This year, the coat campaign was highly successful with nearly 50 coats and a significant amount of other badly needed clothing items delivered to the Sanctuary.
Reflecting on her many outreach projects, Jepson says she is driven first to celebrate the life of her late father, and secondly by two other profound concepts.
“Why do I do this? It answers the question of why bad things sometimes happen to us. I think reaching out to help others when we are hurting gives us a chance to change our focus and realize that things are happening through us rather than to us. Secondly, it allows us to use the experience to reach outside of ourselves.”
Thich Nat Hahn no doubt would say Wendy Jepson is a lotus flower in full bloom.