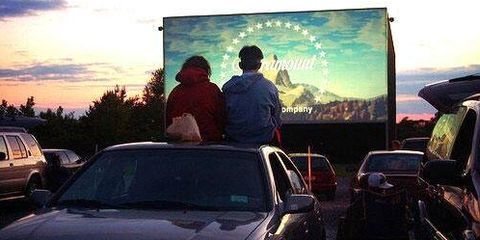 This will be the last edition of the summer and in that regard, I write this with a sense of loss. Days of shorts and T-shirts are numbered. Soon, hard lace-up shoes will take the place of sandals. Order will be restored to my no-watch, no-worries mindset.

I often wax nostalgically about summer, especially those of my youth because it meant long days, warm evenings that seemed to last forever and, of course, the drive-in theater.

Drive-in movies. Even Fruitland, Idaho had one. Well, more correctly what was then the Gayway Junction had one. Recalling the old Pay-Ont drive-in theater brings memories long-stored in my fuzzy memory banks into sharp focus. Some good, others that perhaps should remain buried forever.

The first drive-in was built in 1915 in New Mexico, says the internet know-it-all, Wikipedia. It was a hybrid operation that included a 400-seat auditorium as well as space for 40 cars to park and allowed the occupants to view the movie. Incidentally, that first movie was “Bags of Gold,” the plot of which involved treachery, deceit, bad guys “getting whacked” and explosions. Sounds a bit like something I would enjoy watching…and reading, since it was a silent movie.

The Gem State’s first drive-in movie was the Motor-Vu Drive-In Theater that opened in Idaho Falls in 1947. It served family moviegoers for 70 years but closed in 2017 because the owner lacked finances to upgrade to a digital projector for the theater’s single screen. New owners revived the Motor-Vu in 2019 and in the spring of 2020 the upgraded theater re-opened and continues to operate.

The 1950s and ‘60s are considered the heyday of drive-in movies, with as many as 4,000 drive-ins scattered in mostly rural parts of America. Their popularity no doubt reflected their affordable prices as well as the opportunity for families to spend time together. They also represented an affordable date night. Today only around 300 remain.

I have long been a fan of outdoor movies, dating back to some of my earliest memories, including attending a couple of Easter sunrise services. In the days when cars had spotlights…okay, for those of you in the back, I will explain cars of the 1940s later…one guy inevitably would, while waiting for the movie to start, point his spotlight on the screen and begin to move it around and others would try to “tag” him. Seeing this as a means of keeping the moto-audience occupied while waiting for it to grow dark enough to project the movie, some theaters would show a little moving target on the screen for the spotlight crowd. Simple entertainment for a simpler time.

All of which brings me back to my memories of the Pay-Ont Theater.

In my high school days, going to the movies there was more than simple entertainment, it was a high-stakes game of cat and mouse; of complex strategies and grand chicanery, all designed to get the maximum number of people into the movie without paying for more than two people.

It actually was pretty easy. I had a ’54 Chevy. It had a huge trunk. I had friends who were contortionists. Load up a few guys, drive close to the theater and then jam them into the trunk. It was probably a good thing the kid selling tickets never paid attention to the fact that my car was unusually low in the back.

The downside to this plan was that the guys in the trunk had to stay in there until it got dark enough for them to get out unseen by the watchful eye of the theater owner or one of his minions. After a few summer minutes in my Chevy mobile air fryer, the body odor was staggering.

Occasionally the theater would offer special deals…a dollar a carload or something like that, regardless how many guys were in the car. It was then that our creativity truly was tested. How many bodies could be stuffed into your average passenger car and still motor up the slight rise to access the post-mounted speaker that attached to the car’s window? As I recall, the answer was 11.

By using our dad’s 1951 Studebaker pickup truck, we found we could haul as many as 20 hooting and shrieking teenagers out in the open and into the theater, all for a buck. That movement proved to be short-lived. The owner invoked a little known drive-in theater codicil that allowed him to proclaim the passengers in the back ineligible for the special offer because technically they weren’t in the truck, rather they were “on” it.

Ultimately a changing America claimed the drive-in theater, the Pay-Ont and at least five others here in Idaho. The drive-in movie industry sites the growth of VCR-based in-home movies and the adaptation of Daylight Savings Time (DST) as two of the prime reasons for the decline in outdoor theaters. April through October, DST pushed sundown out to around 10 p.m., too late for most moviegoers to catch a film during the work week. And finally, drive-in theaters’ land became more valuable for shopping centers, industrial parks or housing.

But take heart. Idaho has six remaining drive-ins in operation, two here in the Treasure Valley: the Terrace in Caldwell and the Parma Drive In. Perhaps in these gentle waning days of summer, you should pack up the family and see an outdoor movie…while you still can.