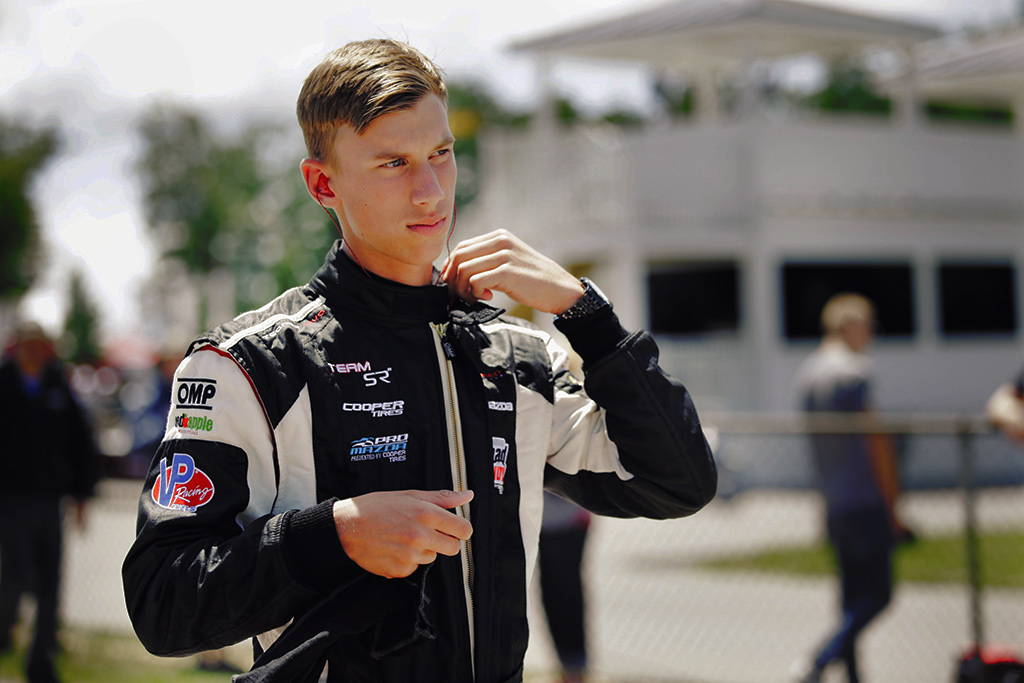 Caption for Sting Ray Robb Pre-Race: Sting Ray Robb is an Idaho native whose passion for racing began early in life. At 20, he is a champion with lofty goals for more racing-track wins, but he remains steadfastly committed to his roots, his family, and his faith. (Photo courtesy of SR2 Racing)

Pop quiz…name a nationally known athlete from Payette, Idaho.
Most folks would answer, “Harmon Killebrew, the incredible first baseman who spent 22 years with the Minnesota Twins!” And they would be correct. But there is another whose career literally is gaining speed.
His name is Sting Ray Robb, and at 20 years old, his racing career is propelling him forward towards becoming a champion in the high-speed world of IndyCar, ultimately racing to win the Great American Race: the Indianapolis 500. And yes, Sting Ray really is his name and his story is nearly as unusual as his name. It is a combined derivation of Stirlingshire, Scotland, shortened to Sting, the place where his ancestors lived, and his grandfather’s first name, Ray.
“When I was 4 years old, I watched a YouTube video of Travis Pastrana jumping a go-kart into a pit of foam rubber,” he said. “When I saw that, I was hooked. I wanted a go-kart.”
That go-kart came a bit later but too soon to start Sting Ray on the road to becoming a future racer. He was too young to compete. Instead, his race track was the family’s long driveway, where he drove daily for almost a year.
“It was almost impossible to get him off the kart,” his mother and “momager,” Kimmie Serrano, recalls. “He knew he wanted to race.”
Robb began racing competitively at 5 years old, about the time most kids are trying their hand at t-ball or soccer. After gaining experience racing at local kart tracks, an 8-year-old Sting Ray Robb entered the wider world of motorsports, racing at tracks and events nationally in the Cadet Class.
By 2014, he moved up to racing in the Junior Division, where in his first season he finished second in the United States and then raced internationally in Spain and Portugal. The following year, he won the U.S. National Rotax Junior Division Championship.
He moved up to racing cars in 2016, racing in the NASCAR-sanctioned K&N series, and ultimately into open-wheel cars, beginning with the late Pro Mazda Championship series. By 2020, he was the series champ. That championship opened the door to the Indy Lights program, one rung away from what is arguably the top of the American racing ladder, racing in the IndyCar series, including the Indianapolis 500.
Today, Sting Ray Robb drives for the auto racing dynasty, Andretti Autosport. In making the announcement of his joining the racing powerhouse, Andretti Autosport president J-F Thormann said, “Sting Ray has shown great progress and talent over the course of his Road to Indy career, and we look forward to seeing what he can accomplish in Indy Lights…”
There is no question that Robb’s racing resume’ is impressive. But it is Sting Ray Robb the young man that is most impressive. He is a man driven by his desire to reach the top of his profession, yet remains firmly grounded to his Idaho roots, his family and his faith. It is perhaps the mechanism that gives balance between the two worlds.
Racing has many component parts, but ultimately it comes down to two elements: mechanical and mental. Poor performance can come from one or both. The mechanical side, the race car and its myriad systems, pieces and parts, can lead to failure. But generally mechanical issues can be found and fixed.
The mental component is another story. A growing number of professional racing drivers are turning to mental coaches to help them in their careers. Mental coaches are becoming as important as physical trainers.
Robb, on the other hand, relies on his spiritual connection and faith as a way to navigate the difficulties of auto racing. In a previous interview with writer Marshall Pruett, he recounted how his faith and belief system helped him overcome his disappointment in his on-track performance.
“I was really frustrated…and I took my helmet off, went stomping in the trailer, and I just went on a little walk by myself for a while,” he said. “They’ve got those trees out in the park area there in Mid-Ohio, and I just knelt down and started praying. I was like, ‘God, this is it. I feel like I’ve given everything that I can, and if it’s not the car breaking down, or someone running me off the track, then it’s me. Everything that can go wrong, has gone wrong. I’m done, this is all I can give anymore.’
“I all of a sudden had this peace about me: this is all part of the plan,” he continued. “This is preparing you, this is what’s going to make you great in the future, because it’s teaching you to persevere. That was that same weekend that I won my first race, and from there on, it was like the floodgates broke open.
“I think that the trials and tribulations, and everything that has gone wrong, has taught me so much about becoming a mature driver: not only how to handle a bad situation, but how to succeed in a bad situation, and having the confidence to look at it and go, ‘Okay, I know what I’m capable of, I believe in the team that I’m with, and I know that whatever they throw at us, we’ll be able to fight through it,’ which I thought was pretty cool.”
As the 2022 racing season begins, it will be interesting to watch the growth of Payette’s other famous athlete.