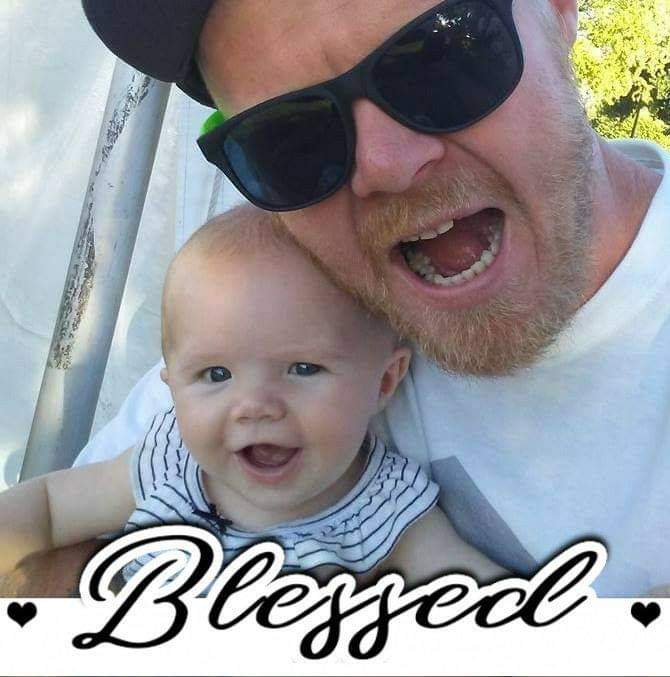 Caption for Ryan & Scottie-Blessed: Ryan had a special photo made of himself and his daughter to show how blessed he has been by her. She taught him to love, and even to live, as he straightened up his life in order to have full custody of his beloved little girl. (Courtesy photo)

Ryan Meier is a 36-year-old man who grew up without knowing the love of a parent. Both his biological mother and father deserted him when he was a child; and as a fourth grader, he ended up staying with a stepfather after his mother abdicated all her maternal responsibilities.

And yet, despite all that, the story of Ryan becoming a father himself is filled with a sweet paternal tenderness that restores one’s faith in the ability of a human being to overcome a painful past. But Ryan traveled a long, difficult road before his hardened heart became a fountain of fatherly love.

Deep in his mind, Ryan carried an unspoken thought: “If my biological parents don’t want anything to do with me, nobody else is going to want me.” He endured that hollow feeling, and starting at the age of 15, he regularly abused methamphetamines. At age 20, he got his first felony charge for possession of a controlled substance and was placed in an Ada County court program to help him get off drugs.

“It was unsuccessful,” he said. “I couldn’t figure life out; I couldn’t connect the dots.”

His story after that is one of being in and out of incarceration, until in 2015, at age 30, he realized the hamster wheel of drugs and prison wasn’t amounting to much of a life. He got a job and said he was becoming “somewhat successful.”

But he made compromises with the lure of drugs.

“I thought if I had full-time employment and structure, I could use drugs like I wanted,” he said.

He also formed a relationship with a woman who in 2016 discovered she was pregnant with his child. At one point, the couple argued over something and Ryan’s temper got the better of him. He ended up with a felony domestic charge. He went to jail for 30 days, and after pleading guilty to aggravated assault, he was later sentenced to probation.

“I knew I couldn’t continue using drugs – and our baby was almost here. I decided ‘no more highs’. I was just focusing on work,” he said.

Scottie Marie Meier was born January 28, 2017, and Ryan realized, “I didn’t want my daughter to ever think, ‘My father doesn’t want anything to do with me’.”

He was able to be at the hospital when his daughter was born and said, “When the doctors placed her in my hands, I thought, ‘I have never loved anybody – not even myself. I have never felt that way.’ But when I held my daughter, I felt it. I don’t know if I ever knew what love was until she was born. But I knew I loved her.”

He made changes in his life immediately, motivated by his love for Scottie.

The first challenge he confronted was while he was still at the hospital. Because he had been up all night awaiting Scottie’s birth, he fell asleep in a chair. “A detective tapped me on the leg and told me my daughter tested positive for meth. I volunteered to take a drug test,” Ryan said.

His newborn had to be closely monitored due to the meth and was not allowed to leave the hospital nursery. Ryan would sit with her in a rocking chair – he didn’t want to leave her. “I was scared to leave for fear she wouldn’t be there when I got back,” he said. He stayed an entire 22 hours straight, holding his baby as much as he could.

After a while, the nurses got used to him and began to teach him a little about how to care for an infant. Finally, one nurse told him to go home and shower. “The baby will be here when you get back,” she assured him.

While he was away, he voluntarily signed up for a drug test and asked that the results all be forwarded to the baby’s Health & Welfare caseworker. He was prepared to do anything for his daughter’s sake.

Because of his past history – and especially for having struck his girlfriend – he was placed on a Child Protection Services list, and the baby was placed in foster care.

“I was disgruntled inside – they said it would take 6 months to a year before I would know if I could have custody,” he said.

He was allowed supervised visits.

On January 30, 2017, when Scottie was placed in foster care, the foster mom, Ronda Pierce, was introduced to Ryan. “She was respectful and understanding and very cordial,” he said. He was holding Scottie at the time, and the caseworker came and took her and put her into a carseat. Painful though it was, Ryan was nonetheless relieved that the caseworker had taken the child from his arms and not Ronda. “If Ronda had come and taken the baby from me, I would have always had that image of her.”

When his emotions were spent, he did a quite unusual thing.

“I had a nice SUV – a Yukon – that I paid $600 a month for,” he said. He also had a Ford Escort. He drove to where he could have both vehicles together. Then, he drove one vehicle a short distance, stopped, walked back to the other vehicle and drove it a ways ahead of the first vehicle. “I kept ‘leapfrogging’ them,” he explained. His goal was to get the Yukon back to the dealership where he’d purchased it and keep the Escort for transportation.

“I couldn’t justify making payments on a car when I had no home and no daughter.”

That night, he slept on the couch at the residence of his former girlfriend, Scottie’s mother. He went to work the next day, and when he came home, Scottie’s mom wasn’t there – she was out doing drugs again. When she finally returned at 3 a.m., she tried to start an argument. Ryan wasn’t buying it, and he left with nothing but a backpack, leaving everything else behind.

He had left home as a teenager at age 16. Now in his 30s, he went to his stepfather’s home – a man he calls Dad – and made arrangements to sleep on the floor so he could save up his money. He also ate a lot of peanut butter and jelly sandwiches in order to stretch a dollar.

The Health & Welfare case plan required him to have a normal, stable and healthy life so he could create a stable life for his child. He went to all his supervised visits and always got there 15 minutes early. “I wanted to show everyone that Scottie was my priority,” he said. “If Health & Welfare was going to ask me to do something, I was going to do it before they asked.”

In fact, he was going to do all they asked and more, to meet all their expectations and then some. He took a Happiest Baby on the Block class at St. Luke’s. It was for pregnant moms, and the expectant mothers in the class were using dolls to learn proper infant care. But there was Ryan, with his real live baby, learning all he could and being 100 percent hands-on.

To continue to learn about child care, he started asking Ronda questions, such as how to give a baby a proper bath. “I would also google things, like when should babies eat and how much,” he said.

After 3 weeks of sleeping on his dad’s floor and subsisting on PB&J, he found a little studio apartment that was about 10′ x 22′ and had a tiny kitchen and bathroom. It cost $390 a month to rent, and he thought it could serve as his and Scottie’s first home together.

On March 23, 2017, a court hearing was held to determine if Ryan could get extended home visits with Scottie and have her stay overnight with him. “I was doing whatever it took, and people were talking about it. I could feel a shift in the room,” he said.

He wasn’t being perceived as a possibly irresponsible risk to his daughter’s well-being, but as a man who was seeking to be an exemplary dad to the baby girl he treasured.

“We were just at the 7-week mark,” he said, rather than the 6-months-to-a-year timetable that had originally been told to him.

At the end of the hearing, he knew the court’s decision was highly in his favor: he was being given Scottie and not just for an overnight stay. “Scottie wasn’t coming home to visit – she was coming home for good,” he said.

Ronda and her husband TJ were present in court. The couple have five kids of their own, and they asked Ryan if they could take Scottie home to their house for one more night so they could all say goodbye to her. He said yes.

“People told me I needed to cut ties with Ronda and TJ, but everything in my body asked, ‘Why would I get rid of these two people who have done nothing but care for me and help me?’” Ryan said.

Ryan has become a speaker and trainer at fostering programs, sharing his perspective as a birth parent. He, Ronda and TJ have remained close. Scottie is now 4 and actually has a baby brother.

“When she was 6 months old, I started seeing somebody. I was terrified of a new relationship,” he said. That girlfriend is now his wife. Her name is Sequoia, and she has become a good mother to Scottie. The couple’s son is named Samuel and is 10 months old.

Ryan works as a construction foreman and is still over the moon about parenting. “It’s tough, challenging, and the most rewarding thing ever,” he said. “Scottie saved my life, really.”