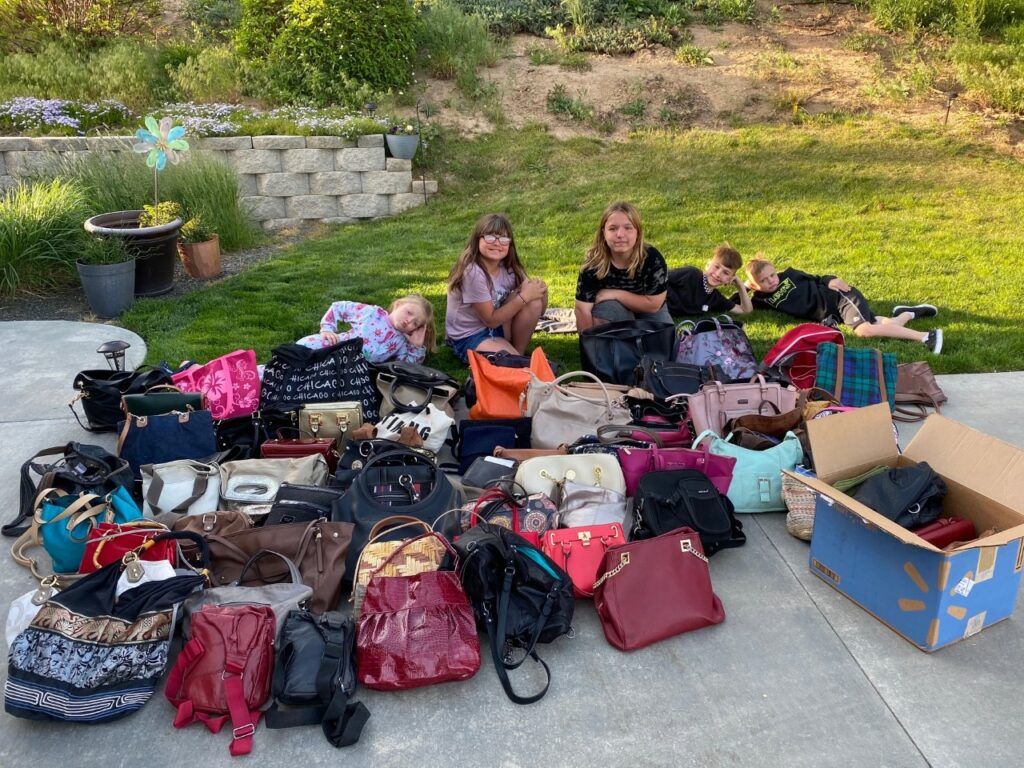 Caption for Lots of Purses: Launee Wolverton’s grandchildren sit with an array of purses donated to their grandmother’s ongoing project for women: Purses with a Purpose. (Courtesy photo)

I guess I can blame my mother.
I was never allowed to touch my mom’s purse, let alone plumb the depths of its many pockets, nooks and crannies. Today, I still am conflicted when my wife asks me to get something from her handbag. That inner squeamishness has made me understand the importance of a person’s purse.
It is perhaps that odd perspective that brought me to realize just how beneficial Launee Wolverton’s work is to women. You see, over the past three years, Wolverton, an area realtor, has given away an estimated 12,000 purses to women in need. And not simply purses, but purses filled with items that make sense to those with little or nothing to their names.
“We initially included things that a woman who was homeless, the victim of domestic violence or even recently out of prison, might need immediately,” she says. “Things like a toothbrush, feminine hygiene products, deodorant, soap, shampoo – things needed to make someone more confident in themselves. Over the course of the years, we also have been able to provide things like make-up.”
A woman driven by her faith and her conviction to help others, Wolverton believes the decision to launch “Purses with a Purpose” was through divine intervention as much as from her vision of the project. “I literally woke up one morning with the belief that this was something I should do. It has been a blessing ever since.”
That blessing has not come without a cost in both time and money. She estimates that over the time she has been committed to the project, she and her husband have spent nearly $20,000 of their own money to ensure Purses with a Purpose is successful.
“It costs between $15 and $18 to fill a purse,” she says. “We receive generous donations of gently-used purses from the community. Finding the donations to fill the 300 we donate each month is the challenge.”
Early on she says she was able to keep purses and the items with which she, her husband and three grandchildren used to fill them.
“It was not an ideal situation because we needed to ensure the important items used to fill the purses were kept warm in the winter and cool in the summer [to ensure their quality],” she explains. “That drove our home heating and air conditioning costs up to the point we eventually opened an inexpensive office in Eagle which proved more economical in the long run.”
She now has a small team of volunteers who, once a month, assist with filling the purses – empty purses she says now arrive at her doorstep thanks to the generosity of families here in the Treasure Valley.
“My front door looks a little like Christmas every morning,” she says.
But in spite of the number of empty donated purses, the struggle to obtain the needed items to fill them is a daily thing.
Currently she receives sporadic help in the form of products from some companies, and local civic groups are generous with donations, but the material and cash outflow seem to be greater than the inflow.
“Our biggest challenge is financial,” she explains. “We are a 501(c)(3) charity so donations made to us are tax deductible. We are hoping that we can attract some help from local and national corporations.”
She sites occasional donations of items from Amazon as a sign that perhaps even large corporations have taken some interest in Purses with a Purpose.
The distribution of the filled purses also has evolved, going from randomly asking homeless women on the street if they would like a purse to a system that now provides the bags to women through local organizations that assist women in distress.
“In the beginning I was not certain of the best mechanism to deliver the purses,” she recalls. “Ultimately, with rising fuel prices, about a dozen organizations pick up the purses and handle the direct distribution.”
The system seems to be working. She recounts a story about being at an event to pass out cards and make the public aware of her organization. During the event she asked a random passerby if she would like a card, and the woman responded that she already had one of her cards. It had been in the purse she received when she had absolutely nothing else. She explained what having something of her own…a purse…meant to her after being incarcerated and then released.
“To me,” Wolverton says, “the importance of a purse to a woman is mind-blowing. It is deeply personal.”
The need for Purses with a Purpose is growing. Wolverton says she now sees women in the refugee community as a group needing her help – and a new phenomenon, homeless high school students, means she must find new ways to help.
“I have been blessed to help so many women and teens,” she says. “I just want to continue to being able to say ‘yes’ to the increasing demand.”

For more information, or to help out Purses with a Purpose, contact Wolverton at launeewolverton@gmail.com.