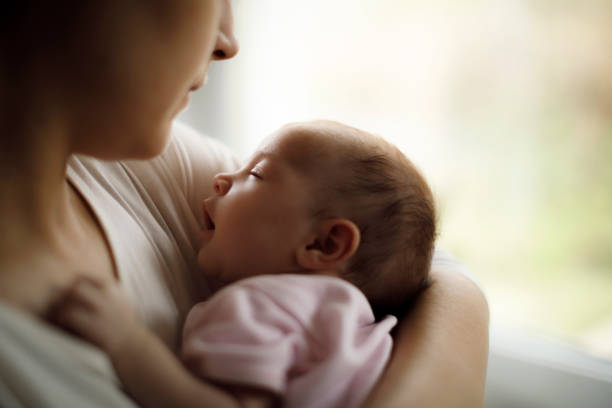 Our first son was born during my final year of dental school in Louisville, Kentucky. We were expecting a blond-haired, blue-eyed baby. He came out with a handsome full head of reddish-brown hair and a quizzical brow. We enjoyed being parents, but sometimes I wondered, is it supposed to be this hard?

He had short sleep episodes requiring breastfeeding every 2-3 hours. My wife would tense with severe pain when he attempted to latch, even though she was on pain medicine. He struggled with reflux and spitting up. I would rock him and lay him down to sleep, only to have him wake up screaming as soon as I started to tiptoe away from his crib.

My wife had mastitis and plugged ducts. She discovered a lump in her left breast and had a needle biopsy to rule out cancer. The pathology report showed that the lump was extra milk in the plugged ducts.

My wife sought out help from a lactation consultant for breastfeeding difficulties and symptoms. They worked on positioning, latching, and a special pillow helped.

None of our birth professionals or healthcare providers ever mentioned Tongue Tie, even though my son and wife had all but two of the symptoms listed on my Infant Tongue Tie intake form.

The only two symptoms they didn’t have were colic and poor weight gain. My son was gaining weight through his own tenacity and the dedication of my wife.

Somehow, my wife powered through these challenges and nursed our son for over 2 years.

Compensations have consequences. When babies require special positioning and pillows in order to feed, oral structures and airways get deformed, which inadvertently sets the infant up for potential airway and breathing issues as they grow into their toddler and child stages.

A glimmer of hope

Our second son also struggled to nurse effectively. He had many of the same symptoms as our firstborn, as well as colic. The constant screaming was unsettling for us all. However, my wife’s experience and expertise made it seem better.

After doing some research, my wife came across a technique called Tongue Tie Release and asked me to look into it.

As a professional, qualified dentist, I had never heard of Tongue Tie Release as it was never mentioned in dental school; so I called a pediatric dentist to get some more information.

I relayed what I was told back to my wife: “As long as the tongue isn’t tethered at the tip, there is nothing to worry about.” Unfortunately this common misconception prevented us from getting help when we needed it most.

The day our third son was born, my wife and I noticed he had a prominent lip tie and tongue tie. Ties are bands of tissue that restrict movement and function.

We asked the hospital lactation consultant for her opinion about the lip and tongue ties. Her answer: “I’m not allowed to say anything, but you might want to check out Dr. Ghaheri, a well-known ENT and an authority on infant Tongue Tie in Portland, Oregon.”

Having read all the information we could find, we decided to have the baby evaluated for lip and tongue tie.

At the one-week visit, the pediatrician referred us to the in-town, in-network ENT.

When the baby was 2 weeks old, we saw the ENT. He said there was definitely tongue tie present, but it was mild and did not need a tongue tie release. We accepted his recommendation – after all, he was the expert. We felt good about our decision, until…

At 3 weeks old, my son showed poor weight gain. He was looking shriveled and gaunt and his body was breaking out with eczema. A weight check revealed he was only 8 ounces over birth weight. The hospital lactation consultant recommended “Triple Feeding,” a protocol of nursing, pumping, and bottle feeding formula to get his weight up.

My wife came home from the hospital in tears, frustrated and overwhelmed. We looked at each other and said, “We should have gone to Dr. Ghaheri in the first place!” We called Dr. Ghaheri’s office only to find out he was out of town for several weeks.

We were desperate. I considered doing the tongue tie release myself with surgical scissors from the dental office.

Dr. Ghaheri’s office called back. They had an approved pediatric dentist nearby who could see us the next day. He had shadowed Dr. Ghaheri and had the same laser. I watched the lip and tongue tie disappear under the beam of the laser. A diamond shape appeared under the tongue, the telltale sign of a full release.

Within hours after the procedure, our son was able to latch and nurse effectively. The post-procedure diligence and care was a little tricky for several weeks; however, the results were incredible. My wife never had to pump or bottle-feed our son with formula. His incredible transformation was the result of functional breastfeeding without Tongue Tie. To this day he is our best sleeper and nasal breather.

This was a turning point in my career. After seeing such great results in my son, I decided to shadow Dr. Ghaheri, undertaking more extensive training, and buying a laser of my own.

We moved back home to Boise, Idaho, where I started my own dental practice dedicated to Airway Health and Tongue Tie. In setting up my practice, I made sure the office and treatment rooms are calm and comfortable with access to International Board Certified Lactation Consultants® (IBCLC®) and private client lounges for breastfeeding immediately after the procedure.

To date, I have helped hundreds of infants and feel incredibly blessed to have helped so many precious infants and families experience near-immediate relief from pain and frustration after the procedure. I am now confident each infant has the best chance for long-term wellness. We use advanced laser technology to fully release your child’s tongue tie in a precise, quick, and sedation-free procedure.

If you and your baby are struggling with any of the symptoms related to ‘Tongue Tie’, book a Tongue Tie Release at IdahoTongueTie.com.