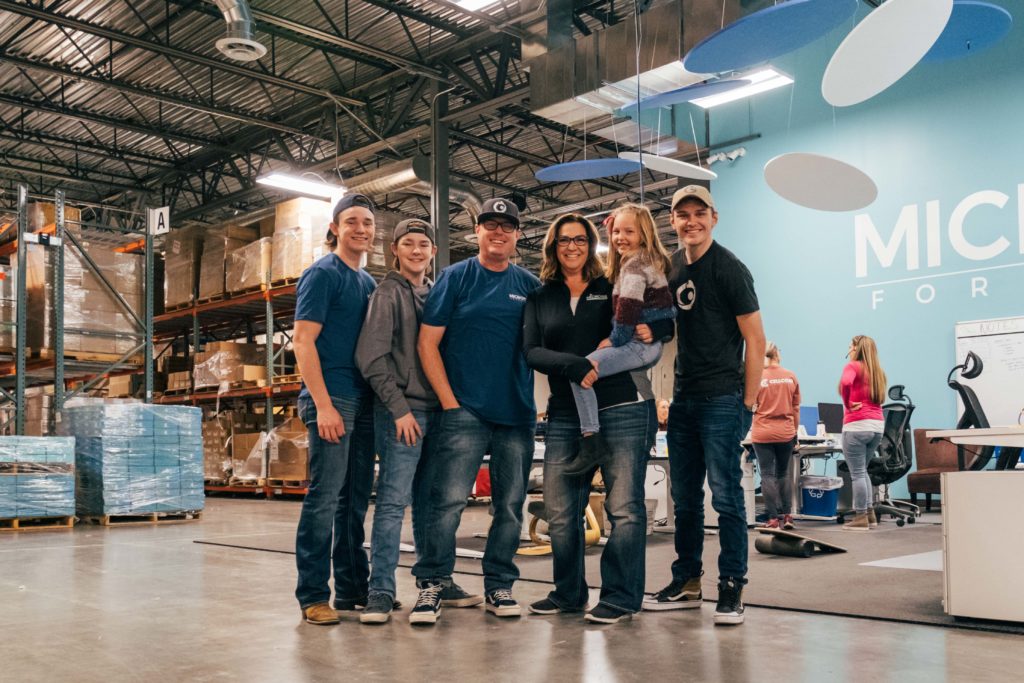 Caption for The Riley Family in Warehouse: The Riley family stands in the Meridian warehouse of Microbe Formulas. They include, from left, Davis Riley, Dallan Riley, Ryan Riley (CEO/owner), Christina Riley, Hattie Riley and Conor Riley. (Photo by Jed Davis)

It all started in one family’s backyard in Meridian, Idaho, and has grown into a multi-million dollar company.

In 2017, two doctors met, after each was battling with personal health challenges. Dr. Jay Davidson and Dr. Todd Watts decided to create the supplement company Microbe Formulas to help others overcome chronic illness. But they needed a CEO to launch the company off the ground.

Then Ryan Riley literally came knocking on the door. Since they attended the same church, Riley came to introduce himself to Dr. Watts. Dr. Watts proceeded to explain their new supplement company and their products.

Riley admits from the get-go he was skeptical. “I’ve worked for every health and supplement company under the sun,” he says. “I’ve developed the back-end for tons of them. So when I heard about these ‘revolutionary new products,’ I rolled my eyes a little.”

But then Dr. Watts gave him access to the store and reports. Riley did his own analysis and noted their potential for success, as well as saw the positive responses from customers.

From there, they operated out of the Riley backyard: creating a website, setting up a manufacturing process, taking calls from customers, and so on.

Riley’s wife, Christina Riley, joined the company soon after. She helped handle many of the logistics of a start-up. Now, she works as the Director of Events. And she’s not the only Riley family member to join the Microbe team.

A family of seven, six of the Rileys work at Microbe Formulas. Brayden Riley, 21, is the Customer Care Manager. He started out taking phone calls and now manages the Support Team.

“I’ve been part of this company since the beginning,” says Brayden Riley. “Starting off in our backyard, then moving into a new warehouse, and then moving to our current bigger location. It’s been incredible to see the company’s growth, and how many lives we’ve touched in the process.”

Conor Riley, 20, is currently interning with the media department to cultivate his love for photography. His younger brothers, Davis and Dallan, are still in high school. But that hasn’t stopped them from helping out outside school and lacrosse practice. Davis, 17, works in shipping during the offseason. Dallan, 14, assists the Support Team in the summer and is also interning at the Microbe lab.

Hattie Riley, age 6, is too busy bossing around her older brothers and loving all things Disney. But she is the up-and-coming Riley team member.

“Working as a family, it’s rad,” Ryan Riley explains. “But it’s also important to take time outside of work to be together. It’s about maintaining a healthy work-life balance. It’s easy to get caught up in talking shop, which is why we make an effort to set aside family time.”

Outside of work, Ryan Riley is an avid skateboarder and enjoys doing that with his kids. As a family, they love to travel, try new foods, and spend time outdoors.

“Microbe is family-centered, even as we keep growing,” Christina Riley adds. “That’s why we put so much focus on our core values as a company. We don’t want to lose that identity and what makes us different.”

Two of their core values are ‘People First’ and ‘Excellence and Integrity.’

Microbe Formulas aims to put ‘People First,’ including its customers and team members. The company wants to lead from a place of love – and this starts with the people behind the brand.

The company also centers on ‘Excellence and Integrity.’ Ryan Riley explains, “We are looking to better our customers’ lives. To do so, we need to create solutions that work. By being 1% better each day, as a team and individually, we get closer to our mission of changing the world.”

Microbe Formulas started out in a suburban backyard with only a few team members (including three Rileys). Now, the company has over 100 team members and an astounding 2794.60% revenue growth from 2017 to today. They also have 20 different immune- and gut-support products, including their flagship product, Mimosa Pudica Seed.

Besides their rapid growth, they look at another number to measure their success: lives touched.

“In our monthly company meeting, we look at ‘lives touched,’” says Brayden Riley. “How many people we have helped with our coaching services, education, outreach programs, products, etc. It doesn’t capture everyone, but it shows some of the difference we’ve made in people’s health journeys.”

To date, in 2020 the company has touched over 2,484,278 lives. But Ryan Riley explains this level of impact is hard to pin down. Like a ripple effect, the company and its values have influenced far more than they can ever track.

Ryan Riley adds, “Our mission statement is, ‘Creating solutions that work is what we do. Restoring hope and health is who we are.’ And that isn’t only limited to our customers. I’ve seen this company bless the lives of team members, including my family.”