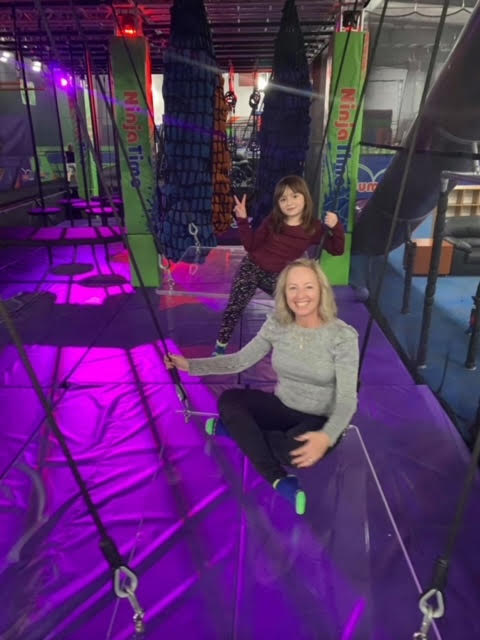 Caption for IRAP Jump Time photo: Tammy Creswell has been looking after her granddaughter, Paisley Turner, since the child was 4 years old. Said Tammy: “We lost her mother (my daughter) 3½ years ago. Paisley is such a treasure and we love her dearly and we had a blast at Jump Time that day.” Jump Time allowed members of Idaho Relatives as Parents to come and enjoy its amenities for free. (Courtesy photo)

Previously in the Treasure Valley there existed a support group called Grandparents as Parents. It actually still exists, but it now operates under a different name: Idaho Relatives as Parents. Current secretary of IRAP, Charlye Hahn, explained a number of people were not getting the support they needed because, even though they had taken in relatives’ children, they weren’t the children’s grandparents. Sometimes they were aunts, uncles, and others.

Charlye, along with her husband, took in her twin great niece and nephew – Austin and Aubrea – when they were 3½ and their mother left them in favor of the lure of drugs; they are now 22 and doing quite well, thanks to the Hahns.

But Charlye (pronounced ‘Charley’) admits her first reaction to taking in two very young children was not in the affirmative. “I originally said no,” she admitted, “because I have four grandchildren older than the twins.”

Her own biological children had grown up, meaning she would have to backtrack considerably on rearing toddlers. Plus, Austin was non-verbal and remained that way by at least age 4½. It wouldn’t be an exercise in merely raising the kids but also giving extra special attention to Austin to help him acquire speaking skills. But her heart soon motivated her to respond with a yes. The kids came to live with Charlye and her husband, and the Hahns became what are called “kinship providers”. Ultimately, they adopted the twins.

Charlye has been involved with IRAP for about 6 to 7 years. The non-profit changed its name in 2014 to accommodate relatives other than grandparents who were taking in the kids of other family members, whether through the death of the parents or dereliction of parental duty by the children’s father, mother or both.

Child Protective Services is sometimes involved in the extended family arrangements, but frequently it is not. However, the children are legally considered foster children until and unless an adoption takes place, even though they’re living with relatives.

The caregivers are eligible for $309 a month through a relative grant fund from the state – and that’s the standard amount no matter how many kids have been taken in. “It doesn’t go far,” Charlye said.

Some businesses, organizations, churches, and individuals have pitched in in various ways. To name a few*:

• Jump Time allowed the kids to come in and enjoy its amenities for free.

• Churches stepped up in any way they were needed. Through churches, Christmas gifts were given to 80 children last year, while at the same time, an area philanthropic group provided dinner for all the families.

• A church women’s group gave an individual who had taken in her five grandchildren donations of household cleaning items, gifts, and a new microwave to replace her broken one.

• The Wardrobe supplied quality clothing to all the foster youth.

In all, IRAP helped 35 families with all kinds of needs in December of 2020. The numbers fluctuate from month to month, but the need is significant. Charlye said unapologetically, “I want donors. I want more businesses to come on board. I’d like an email list I could use, so if there is a need I could reach out to someone who has volunteered and is able to help.

“We have a fantastic support group, but Covid put a damper on our forward momentum.”

IRAP has a board. Officers include: Mike Ball, facilitator; Toni Jones, co-facilitator; Sheila Myers, treasurer; and Charlye in her role as secretary, at present. All the board members have served in the relative-as-parent role. The non-profit also has an advisory board.

IRAP maintains a private Facebook account; to access it, interested people may email IRAPTRVY@gmail.com to get a link to the account. Information may also be obtained through Idaho CareLine 2-1-1. Go online to 211.idaho.gov and read the following about IRAP: “Idaho Relatives as Parents is a community of grandparents and other family members who are raising a relative’s child. … If you are one of the 10,000 kinship care providers in Idaho, you are not alone and there is support available for you in the community.”

“Come to a meeting and there’s no judgment,” Charlye said. “We welcome any person with open arms. It’s one safe place that you can feel comfortable in. We always have Kleenex. Tears are okay – happy tears or sad tears. We support and cry with one another.”

She said some people have no pity for grandparents and others taking in family members. They say, “You chose to do it,” to which Charlye replies, “Yeah, they did. But those of us in IRAP get it. We know what they’re going through.”

She said another area of contention with people who haven’t walked in their shoes is this attitude: “Why should you parent your grandchildren when you did such a poor job raising your own children? If you’d done better, your son or daughter wouldn’t be on drugs or in jail and they’d be taking care of their own offspring rather than you doing it.”

One of the best things a person can be at an IRAP meeting is understood rather than judged.

Members have fixed meals and taken them to fellow IRAP’ers who needed them; they’ve given extra beds or dressers, or sat with the kids while the adults had a Date Night.

Charlye wants to publicize the non-profit more and has undertaken an IRAP rack project to put cards about the support group in dentists’ and doctors’ offices; and she’s ready to tell fellow members to put the cards everywhere they go.

“I believe people will step up if they know what the needs are,” she said.

A relative-as-parent can’t always use the same set of parenting skills on the newcomers as they did on their own kids. It’s a different paradigm, and different kids. “You have to stretch and find other ways because there’s more than one way.”

Even as she was taking care of her great niece and nephew, she was learning and growing too, sometimes realizing, “The lesson is not for the child. It’s for me.”

*Many other churches, businesses, organizations, and individuals pitched in to help out Idaho Relatives as Parents during Christmas 2020. Many will be needed this year also, as well as throughout the year. Contact Charlye if you want to help out.