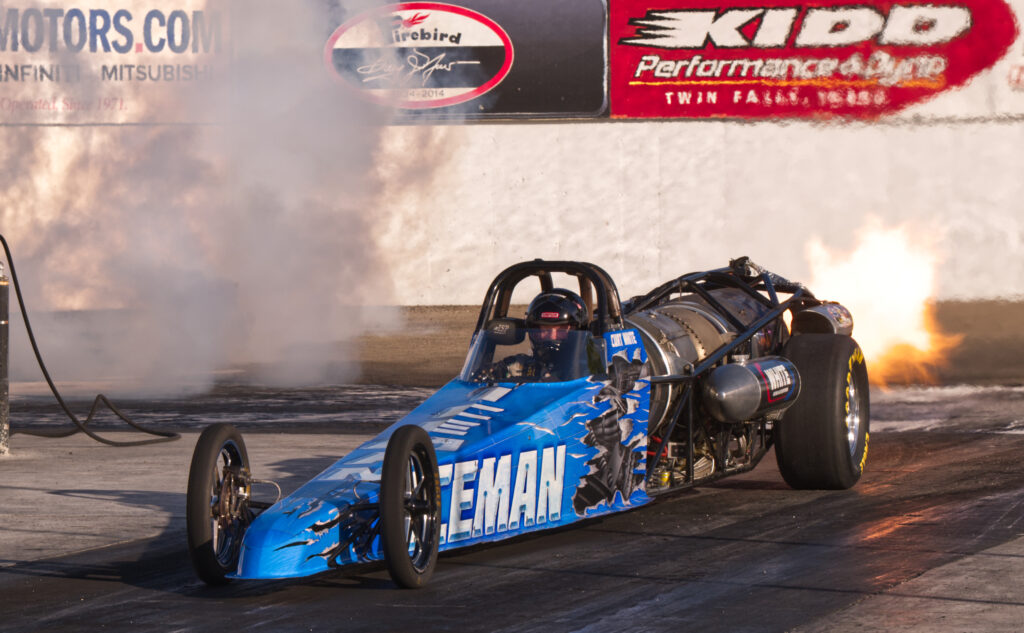 Drag racing is all about raw horsepower, performance and elapsed time. But for Boise’s New brothers, it’s about much more. It is a commitment to continue, preserve and improve the historic Firebird Raceway drag racing venue started by their parents in 1968. Simply put, for them, it is all about their family legacy, family spectators and family racers.
Scratching a drag strip out of the Idaho desert off of Idaho State Highway16 from what then was barren land, the late Bill New and his wife built a sprawling 80-acre racing facility that today hosts a wide variety of drag racing.
The building and improvements to Firebird Raceway ultimately led to the three New brothers – Scott, Brad and John – growing up learning every aspect track management and maintenance from the ground up.
“We basically grew up here and were guided along by our parents,” Scott New explained. “They gave us guidance so we eventually could step in and take over.”
“Taking over” meant ultimately dividing the duties critical to a successful racing facility. Today, Scott serves as general manager, Brad as marketing manager, and John facilities manager.
“We hold between 50 to 60 races from April into October,” Scott explains. “Some feature top fuel dragsters, others, the family car. Many of the local racers are multi-generational with grandfathers, fathers and children all racing on the same weekend.”
New says that one of the special things about drag racing is that all events allow spectators accessibility to drivers and crews.
“The racing pits are fully accessible,” he says. “It gives fans a unique perspective to motorsports. Nearly every other form of motorsports prohibits access to the pit area by the public.”
Firebird Raceway also serves as an incubator for the sport of drag racing. Special programs such as Junior Drag Racing offer drivers from 5-years-old to 17 a chance to compete driving half-scale versions of top fuel dragsters. Engines are limited to a single-cylinder that delivers five horsepower.
New explained that young drivers and their parents also can gain entry into the sport through the NHRA’s Jr. Street Program, one of the classes that competes at Firebird. Boys and girls from 13-to-16 years old have the opportunity to race against their peers in full-bodied street vehicles with a parent or other adult co-driver as their ride-along teammate. The program combines racing and car safety. Sponsored by the NHRA, it is seen as a way for families to use drag racing as a driving learning tool and as a unique means for family bonding.
Competitors go through an orientation/licensing procedure on an eighth-mile dragstrip in their vehicles, which must meet program requirements. Approved vehicles must be registered, insured, street-legal vehicles with mufflers and street tires.
“We’ve had thousands of high school kids compete here,” New says. “Drag racing is a unique sport. We have kids competing as young as 5-years-old and one driver who is 85.”
On the other hand, over the 54-year course of its history, Firebird Raceway has attracted some of the biggest names in NHRA drag racing, including John Force and super rivals, Don “The Snake” Prudhomme and Tom “The Mongoose” McEwen.
The historic aspect of Firebird Raceway also brought the track its “finest hour,” according to Scott New.
“In 2019 we were named to the National Register of Historic Places with the help of the Idaho Historical Society,” he says. “It was a long process but we became the first drag racing track in America to be named to the Registry. It means Firebird Raceway will be preserved for future generations.”
A growing Treasure Valley has brought some changes to Firebird – new cars and new competitors. A changing environment also may mean changes in racing at Firebird.
“We’re beginning to see some changes,” he says. “For example, electric cars now are in the mix of vehicles running today.”
Regarding the future of drag racing here in the Treasure Valley, New sums it up by saying he and his brothers are ready to go along for whatever ride the future may bring. “We’re eternal optimists,” he says.

IF YOU GO…
• Motorsports are by their nature loud. Bring ear protection for everyone, especially children.
• Unlike many sports venues, Firebird does allow small six-pack-size coolers with food or water but no alcohol and no glass bottles.
• Hats, sunscreen and sunglasses are a must as the grandstands are mostly uncovered. Personal umbrellas are okay; mega golf umbrellas should be left at home.
• Bring your camera but leave your drone.
• Try the track’s “World Famous Hot Dogs” or their half-pound of ice cream. Credit cards are welcome for all food venues as well as for tickets.
• Be ready for fun.