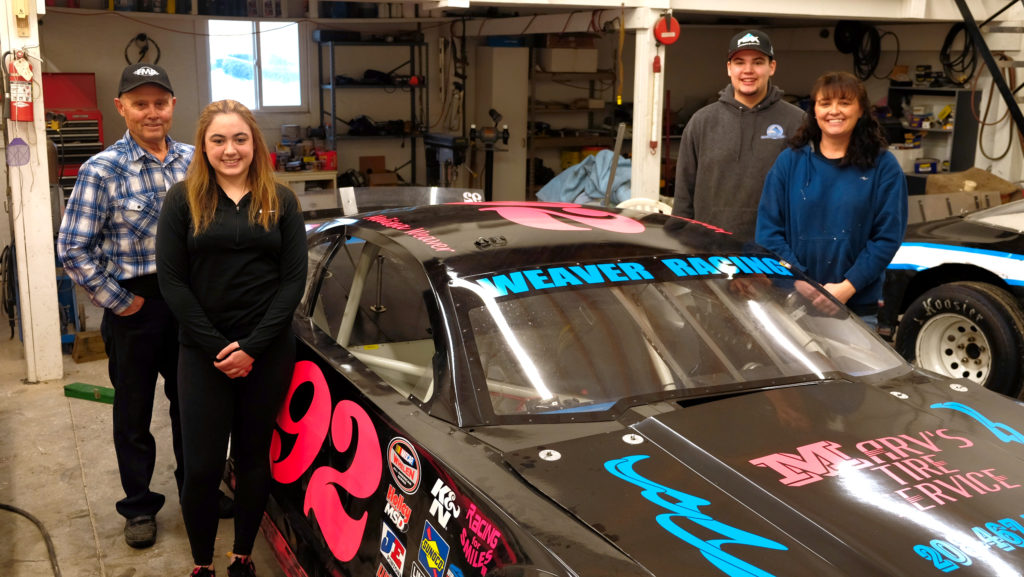 There is something about Nampa’s auto racing Weaver family that is hard to explain; in some ways it is akin to a dual personality. Sitting in the large, pleasant kitchen of Marv and Donna Weaver’s hilltop home, chatting with three generations of family members, it’s easy to forget they are a hard-driving, give-no-quarter family of racers at Meridian’s quarter mile-speedway. But the stories and inside jokes have a familiar focus; they center on auto racing, and perhaps more important, on family.

Their racing story began 58 years ago when Marv Weaver entered his first oval track race. His journey would lead to his eventually switching to street stock cars, cars with conventional full-fendered bodies. The change in classes also began to bring the senior Weaver success, including wins that earned him an ounce of gold, a diamond ring and even a trip to Hawaii before his retirement from driving. Marv was inducted into the Western Idaho Racing Association Hall of Fame in 2003.

Today he no longer drives, rather he says he is chief mechanic for the rest of the Weaver clan: his daughter Melissa and her daughter and son, Kendra and Taylor Occhipinti. With a daughter and two grandchildren driving Meridian Speedway’s quarter-mile oval, the story of the racing Weavers has many more chapters to go.

“I started racing six-cylinder [open wheel] cars in 1962,” he says. “We raced in Meridian, Hermiston, a lot of different tracks.”

Doubtless, Marv Weaver never considered he would be leading the way for future members of his family to race. Nor did he imagine that his daughter, Melissa, would break not only track records, but break through the local motorsports’ gender barrier as well.

“I watched a lot of races growing up,” recalls Melissa. “By the time I was 14, I wanted to race cars but was too young. In 1991, I began racing in the ‘Bomber’ class.” Bombers, she explains, were basically a street car with limited or no real racing modifications allowed. “It wasn’t easy in the beginning. I made a lot of trips from the front of the pack to the rear.”

In spite of her racing difficulties, that year she still managed to place tenth overall in points for her class out of a field of 40 cars. It was a glimpse at a future champion. In 2019, she would be inducted into the Western Idaho Racing Association Hall of Fame, just like her father 16 years earlier.

In those first years of racing, not all of Melissa Weaver’s difficulty was on the race track. She says there was considerable resistance from her mother, Donna, who worried about her safety, and from the racing community and race fans who believed women had no place in auto racing.

“Thirty years ago, times were different,” she recalls. “There were only a handful of girl racers at Meridian Speedway when I started. For about the first four years of racing, I put up with a lot of flak, rolled eyes, teasing and rude comments. It seemed like I had it from all directions. I often cried when no one was around.

“I finally decided, I’m here to stay and I’m going to continue to do what I love and show them that I belong to be here as a driver.”

It was in those early years she also learned how to put critics in their places, both verbally and on the race track.

She says that a key to her success as a driver has been consistency. That consistency led to her ultimately winning a dozen championships. While each has been rewarding, she says her first championship was her most memorable.

“I won it sitting in the stands,” she says. “Just before the final race of the season, I found out I was pregnant and didn’t want to race. My dad was in second place and I was afraid that if I sat out the race and he won, I would not have enough overall points to win the championship.”

“We compromised and my dad agreed to set out the race with me and we watched the race together with the fans. I was far enough ahead in total points to win without racing.”

Melissa’s son and daughter started their racing careers at the age when most kids are playing softball or soccer.

“For Taylor,” Melissa says, “there were two championships, one in the High School Tuner Class and one in the Junior Stingers.”

“Maybe I race my sister a little harder,” admits Taylor.

While Melissa Weaver is a skilled driver, she is by some accounts a terrible fan.

“You don’t want to stand near Melissa when the kids are racing,” says her mother. “She’s a nervous wreck when they’re on the track.”

Yet Melissa insists that being a racing family means being close to one another.

“I think that racing has made us close as a family,” she maintains. “We spend a lot of time together, working on our cars or going over video from our in-car cameras. We analyze our individual performance and help each other improve.”

She says finding balance is a key to their closely-knit family’s success. “Doing what you want and like to do is the way to follow your dreams.”

Today, she sees changes in her sport, changes that she says are encouraging and the fulfillment of her goal set years ago.

“I look down the pit lane each week and I see all the young girls starting out, and the women drivers that have several years of experience now, one being my own daughter; I realize that all of the flak, rude comments and teasing was worth it in the end,” she says. “My goal was to prove that racing was not just a guy’s sport and if you have a dream, don’t let anyone tell you that you can’t have it!”