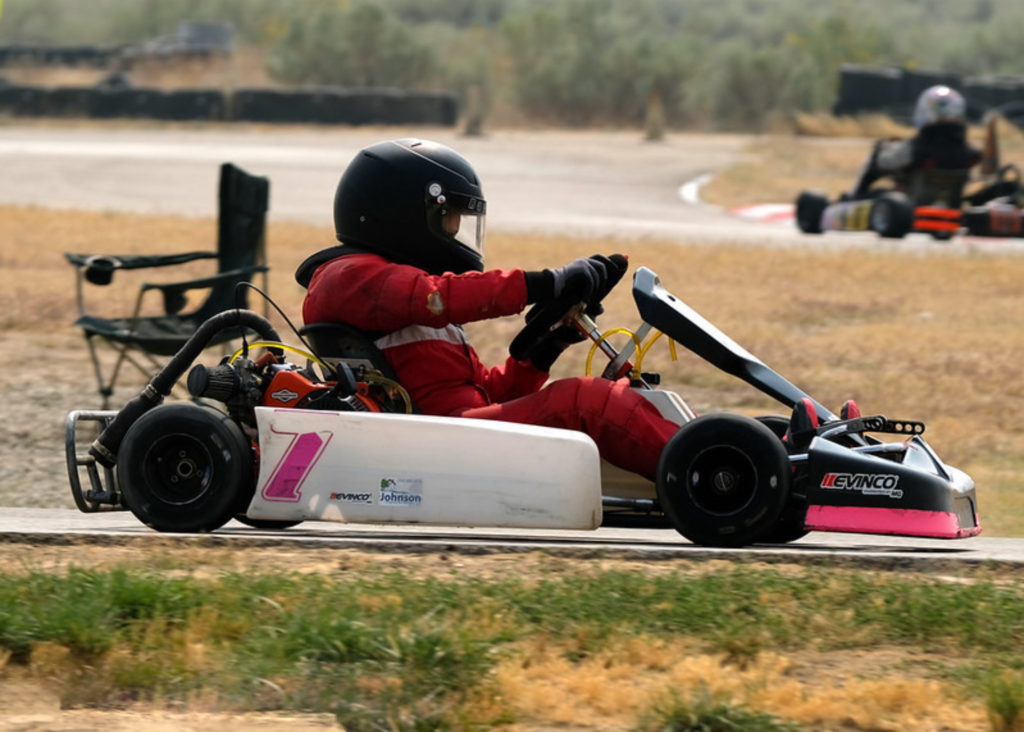 Caption for Number 7: While taking photos at Glenn Morgan Raceway near Star last summer, Dennis Lopez spotted racer Number 7 through his camera lens. Charley Ford, then 10 years old, whizzed around the track in her humble racing outfit, steering her ordinary kart. Eventually, the photographer met her and other members of the Ford family and learned about their enthusiasm for kart racing. (Photo by Dennis Lopez)

This story began because of a torn sleeve.

It was a 2020, pandemic summer afternoon and I was shooting photos at the Glenn Morgan Raceway near Star, Idaho. The karts were colorful, the action fast and gave me a chance to work on my motorsports photo skills. Using a telephoto lens, I could pick out individual drivers to follow. That’s how I first saw the tear, and ultimately, how I met the kart racing Ford family from Kuna.

The kid at the wheel was driving well, but unlike most of the other drivers and their karts, there was something different about Number Seven. The graphics on the kart were tattered, the numbers faded and the driver’s little racing suit had a visible tear on the right sleeve. It seemed to me that this was a racer with a lot of heart, but a limited budget. I wanted to learn more.

It was easy to spot the kid’s grandparents sitting trackside; the couple cheered and waved when Number Seven went by.

“Would you like some photos of Number Seven?” I volunteered.

And with that brief exchange, I began to learn more about the driver. The driver was then 10-year-old Charley Ford. Later, through emails, I met her dad, Chris Ford, and ultimately the rest of the Ford clan: mother Jamie and youngest son Cam.

Chris Ford is no stranger to motorsports; he has raced a variety of cars from bone-stock “bombers” at Meridian Speedway to open-wheel midgets in the Midwest. So when in the course of his work as a Treasure Valley property maintenance technician, he came across a pair of inexpensive-but-neglected go karts, it seemed only natural to buy them for his kids.

“It took a while but we were able to make one kart from parts of both,” he remembers. “Our first race was a bit scary. The first time out, the throttle stuck on Charley’s kart and suddenly she was going flat out. She got it under control with the brakes and shut it off with the kill switch without incident. She got right back in the kart as though nothing had happened.”

From that somewhat dubious start, the Fords gained knowledge of both driving and building go karts, in part with the help of the local go karting community.

“I can’t say enough about all of the help we have had along the way,” Chris recounts. “People in the karting community are generous with their time and experience. They are there to help anyone who needs it.”

He also greatly credits his wife, Jamie, in helping with the formation and growth of the family’s karting efforts.

“We could not have done this without her help,” he says. “She has supported and trusted us to be financially prudent, safe, and have fun, without really knowing a lot about the sport.”

To some parents, the idea of their child competing in motorsports may seem dangerous or questionable at best; however, Chris Ford believes it is a family sport that provides valuable, quality time with his children.

He says the time they spend working on karts each week or time at the race track is time that he knows where his kids are and what they are doing.

“And they are doing something they like. The neatest part about racing is that unlike many sports, you don’t wait to be called off the bench by the coach. You just do it. In a lot of ways, you are competing with yourself to make the next lap faster or to find a way to [mechanically] make the kart faster. You’re in control.”

For 11-year-old Charley Ford, racing is at the top of a very crowded list of interests that includes basketball, track, volleyball and dance.

“I’m doing hip-hop now, but am going to start ballet soon,” she explains to me as she and her dad prepped her pink and teal kart for pre-race qualifying this spring.

Yet for all of the activities in which she is engaged, it is her racing that sets her apart from her friends.

“They really don’t know or understand what I do,” she says. “But most of them think it’s pretty cool.”

She also talked a bit about any fears or concerns she had about racing.

“It’s a little scary when people are close to you [on the track],” she admits. “I also worry about where other karts are on the track. But I’m not really afraid.”

This summer also will mark the debut of 7-year-old Cam Ford into the world of racing.

“He has watched his sister race and now it’s his turn,” said his mother, Jamie. “He’s very excited about racing. I really think that what he and Charley are doing is pretty cool and I look forward to seeing them both race.”

As for first-grader Cam, he sums up his entry into motorsports by simply saying that the best part of kart racing is “everything.”

If there is any question about whether or not go kart racing is a family sport, it was perhaps answered by Charley when asked who were her heroes. Her answer was simple and unequivocal.

For more information about the raceway where the Ford family enjoys kart racing, go to www.snakeriverkarters.com.