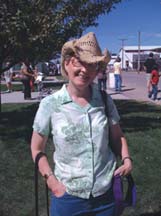 I crouched under the theater seats, waiting for the zombies to pass by. Live zombies, mind you, not zombies on the movie screen. I was scared; I didn’t want those awful-looking things to see me. My younger sister sat calmly in her seat, looking down on me with bemusement. But never mind that. I didn’t want those voodoo monsters within 5 feet of me!

Okay, that was a long time ago, but it still embarrasses me. I don’t remember my precise age, so I’ll guess maybe 13. And yes, I knew those zombies were grown men in Halloween costumes. But still, they had crazy hair, wild eyes, and fake oozy blood on them.

I know some people these days don’t like the scary, sort of gruesome side of Halloween; and as an adult, I don’t care much for it either anymore. But it sure was fun as a kid. I did, after all, go to that scary movie voluntarily, and I did know that at some point, some “real” zombies were going to invade the theater. Sometimes there’s just something fun about being scared on a voluntary basis — saying, in effect, “I willingly allow you to frighten the daylights out of me!”

As we approach Halloween 2019, I look back on another memorable “go ahead and scare me” moment.

Haunted houses were a hoot. Back in the small town where I lived as a kid, we generally knew most of the people who ran what passed for “haunted houses” in those days. I remember walking through one of them with my cousin. A good friend of my parents’, a man named Jack, was helping lead kids through the house. It was very dark… Darkness alone is enough to scare you. Jack took my hand, put it into a bowl full of squishy stuff, and said, “This is a bowl of blood and guts.” Then he took my cousin’s hand, put it in the bowl and said the same thing: “This is bowl of blood and guts.” To which my cousin replied, “It is not! It’s spaghetti!”

Yep. It was spaghetti all right. I played along — Jack was a family friend after all. My cousin wasn’t so amenable.

My mother likes to decorate her house every Halloween, and she does include some of the scary stuff like ghosts and such. She could decorate with goblins, but who really knows what a goblin is? But she has skeletons, ghosts, spiders, and a snake or two (plastic ones of course).

I’ve watched kids of all ages walk up the driveway and they never seem the least bit daunted. They politely yell, “Trick or treat!” They’re all in costumes and they’re all polite, thanking us for the candy when we put it in their cloth bags or orange plastic pumpkins.

Mom and I tried wearing scary masks the last couple of years but, you know, when you’re older you just think, “Ugh, it’s hot under here.” Being an adult is so restrictive at times…. But I think the scary parts of Halloween are okay, as long as everyone is willingly in on the joke.

My favorite costumes nowadays are the princesses, the pirates, the superheroes, the ballerinas, and anything really cute on the littlest children. I look forward to seeing a parade of youngsters in costumes again this year. No zombies at our house, and no spaghetti…unless it’s for dinner. We’re pretty low-key with The Scaries at Mom’s house. But if your children want to get voluntarily scared in a haunted maze or house, let them do it. After all, it’s all just in fun.

Posted in Meet the Publisher