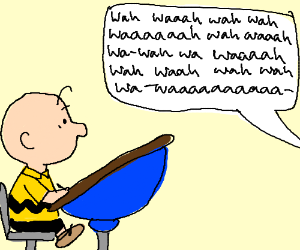 If you’ve ever seen a Charlie Brown movie, you know that the stories are all about the kids’ perspectives and adults are never seen. If there’s ever a time when one of the Peanuts gang interacts with an adult, all you hear the adult saying is, “Wha wah, wha wha wah wah.” Sadly, it’s been my observation that a lot of elementary-aged kids hear “Wha wah, wha wha wah wah” when their parents are giving them advice or correction. Then, when those kids become teens, their parents often wonder why their relationships have become strained. Sadly, the answer rests in patterns established by the parents years before.

Here’s a scenario. A young child does something he is not supposed to do, and the parent reacts with an abrupt, “No!” The child immediately stops the offending behavior, but fear activates his sympathetic nervous system, otherwise known as, “Fight or flight.” Whenever anyone’s body enters this mode, blood flow is directed primarily to the heart, lungs, and major muscles. It’s a survival design mechanism. If a person senses danger and experiences fear, his or her body sends blood to the lungs to process oxygen, to the heart so it can pump oxygen-rich blood, and to the major muscles so the person can either fight for survival or run.

The problem? When a person’s body is in that mode, there’s not much blood going to the pre-frontal cortex — the part of the brain used for logical thinking. It’s true for kids as much as it is for adults.

In fact, a parent doesn’t even have to be abrupt and or loud when calling a stop to errant behavior. Just being told they messed up can activate a child’s fear and subsequently engage the sympathetic nervous system.

Does this mean we should stop correcting our children when they do things they shouldn’t be doing? Not at all. But it does mean that trying to instruct them via lecture or logic immediately afterwards may not be the best practice, because it’s highly likely the kids will hear, “Wha wah, wha wha wah wah.”

I know a person who did this to her kids all the time. She’d read the book, “Parenting with Love and Logic,” and decided to practice it with her young children. Two hiccups got in the way of her success. The first is what I just described above. She never got on the same page with her kids emotionally before engaging them mentally. The second is that the brains of young kids are not typically wired to process logic. Young children are still learning how to process their emotions, and most of all, they want to know they are loved, even when they make mistakes. According to the four stages of child development, it’s not until children reach the age of 10 – 11 that you can start using logic effectively.

And yet, this person persisted, trying to hold logical discussions with her children while the rest of us watched her kids’ eyes glaze over. When she’d ask if the kids understood, they would nod that they did, but only because if they didn’t say yes, mom would keep talking. By the way, I’m quite confident her kids were hearing, “Wha wah, wha wha wah wah.” When kids are 3 and 5 years old, their brains aren’t wired for that depth of logical processing.

Simply stated, this common but ineffective pattern of communication — offering corrective instruction immediately after notifying a child of a bad or ineffective behavior — may not be the best choice for building relationships. Granted, as parents, our hearts are usually in the right place. I know, because my intentions have been good whenever I’ve been guilty of taking an “immediate correction” approach. But I speak with experience when I say that more effective methods exist.

As someone who’s been teaching emotional intelligence and doing executive and management coaching for decades, on more than one occasion I’ve had to do a face-palm and say, “Bobinski — you teach this stuff! Put it into practice.”

Everyone wants to feel safe

Some fundamental keys to good emotional intelligence are that people want to be understood and they want to feel safe. It’s true of everyone, no matter what their age. But for some reason, it’s harder to exercise patience when the young person we’re talking to has our last name and represents our family. Maybe you can relate. However, what I’ve learned is when we’re helping our kids learn, efficiency needs to go out the window. In its place we need a ton of patience and a wide-open ear.

Habit Five from Stephen Covey’s “Seven Habits of Highly Effective People” is, “Seek first to understand, then be understood.” It’s a powerful habit, and one that applies to all relationships. But I’ve come to believe that in family relationships, us parents need to seek first to understand two, three, or four times more than usual. No, it’s not efficient. But, as the title of Covey’s book suggests, it’s effective.

This practice goes hand-in-hand with the saying, “People don’t care how much you know until they know how much you care.” Just put the words, “Your children” in place of the word, “People” in that sentence.

I’ve also realized that the older my daughter gets, helping her arrive at healthy choices involves me doing more asking (in a genuine, caring tone) than telling. Like all people, she wants to be understood and accepted.

Bottom line, I believe healthy family relationships come from healthy communication patterns. And, as the adults who’ve been around the sun a few more times than our kids, it’s up to us to learn healthy patterns and put them into practice. Nobody is perfect at it. But we can work at it. We’re going to stumble and make mistakes, but unless we put forth the effort, we’re practically guaranteed to sound like the teacher in a Charlie Brown movie.

Daniel Bobinski, M.Ed. teaches teams and individuals how to use Emotional Intelligence, plus how to create high impact training. He’s also a homeschooling dad, a best-selling author, and a popular speaker at conference and retreats. Reach Daniel through his website, www.MyWorkplaceExcellence.com, or 208-375-7606 (ofc).